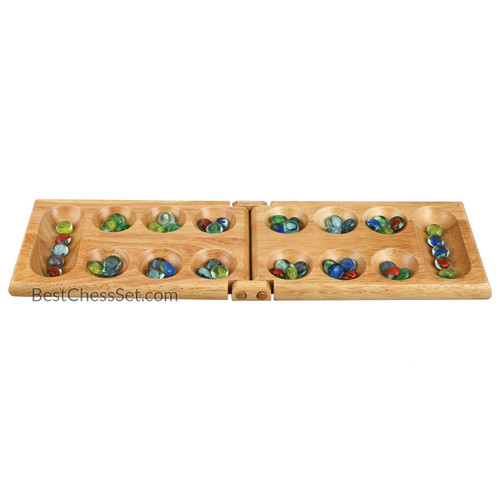 Enjoy your favorite fast moving game of skill and strategy with the Melissa Wooden Folding Mancala Set. Mancala can be played by players of all ages. It is played throughout the world and has been especially popular all over Africa and the Middle East for Centuries. The game dates back thousands of years ago and is said to have originated in Ancient Egypt. Mancala can be played by two players or two teams. The playing board has two rows, each containing six recessed circular spaces, as well as one larger recessed oblong space (also called the "home") at either end. The playing board is laid horizontally between the two players. Each player (or team) takes 24 game beads and places six of them in each of the six circular spaces on his or her side of the playing board. Each player's home space is the large recessed space on his right side of the playing board. The object of the game is to collect the greatest number of beads.

Makes a great gift for any occasion